byNirmal Academy
0
Ecology is the study of interaction between organism and its physical surrounding. It can be studied at four different level of biological organization which are ( ORGANISMS AND POPULATIONS )
 Organism
 Population
 Communities
 Biomes

At organism level ecology is all about how organism interact with the surrounding abiotic factors and bring about a change in its physiological process (adaptation) to attain maximum fitness. Different regions on the earth receives different intensity of light and precipitation. This difference accounts for the formation of different biomes such as rain forest, desert and tundra. Within this biomes are area of regional/ local variation which form variety of habitat.

Different biomes in India are:-

a. Tropical Rain forest
b. Deciduous rain forest
c. Desert
d. Sea coast
Mammalian gut is store house for different species of microbes and thus considered as a biome.
Every habitat shows variation in the physical and chemical condition. This variation is on account of variation in Abiotic and Biotic factors. With time the organism adapt to these factors to optimize its survival and reproduction in its habitat.

i.) Temperature
Temperature is defined as the degree of hotness or coldness of a substance.
Factors influencing variation in temperature:-
Slope aspect Temperature has a significant effect on the climatic conditions, growth responses of plants, and activities of organisms. We all know how temperature effects the enzyme kinetics and basic body metabolism. Temperature act as a stimulus for plants, determining the timing of their development. Exposure to cold enhances seed germination
1`(vernalization), as well as induces flowering in some plants. 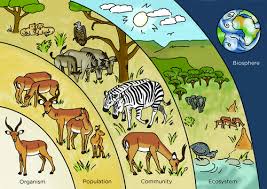 Ectotherms (cold-blooded animals):- The body temperature is matched with the environmental temperature of the habitat. Frogs and snakes, control their body temperature by moving around or by seeking shade. Some ectotherms feed only during the night. Endotherms

They change their body temperature by physiological means and maintain a more or less constant internal temperature, even when the temperature outside fluctuates. Birds and mammals have physiological mechanisms for keeping body temperature constant or within tolerance limits called as homeostasis.
ii) Water
Water is the only inorganic liquid occurring naturally on earth which can function as a resource, condition or a habitat. The total amount of water on earth remains the same; however, it moves from one place to another and regulates various processes in organisms. Water regulates the climate through its role in rainfall distribution and temperature modification. It has significant effect on vegetation type and its composition.
The composition and pH of water determines the suitability of a species to live there. The salt concentration in sea, river and inland water is different and thus inhabited by different species. Some morganism tolerate a wide mrange of salinity and thus called as euryhaline while some can tolerate only a narrow range of salinity, stenohaline.
iii) Light
Sun is the ultimate source of energy directly or indirectly for most of the organisms. Light or visible spectrum having wavelengths of 400 – 700 nm is also called photosynthetically active radiation (PAR). The quality (wavelength), the intensity (energy measured in joules) and duration (length of day) of light are important to organisms. The intensity of light varies with latitude and time of the day.
Light, affects the processes of photosynthesis, growth and reproduction in plants. The quality of light plays an important role in flower induction, seed germination and plant movements. The duration of light regulates the phonological processes, such as flowering and fruiting, in plants.
Phenology refers to the timing of seasonal activities of plants in relation to change in environmental conditions. In many animals, migration, hibernation and reproductive behaviors are controlled  by the relative lengths of day and night.

 Soil is the uppermost weathered layer of earth’s crust and is composed of minerals and partly decomposed organic matter called as humus. It plays an important role in plant growth and development by providing water, nutrients and anchorage. The nature and properties of soils depends on the minerals in the parent material and the extent of weathering, and it differs from one place to another.
In the grassland, the roots of native plants penetrate deep in the ground, forming a dense sod (turf) that holds moisture and prevents erosion, and adds large amount of organic material to soil each year.
 In temperate forest soils, the top horizon is a rich mixture of humus and inorganic soil components In tropical rain forests, dense clay subsoil, heavy rainfall, and high temperatures result in nutrientpoor and shallow soils The nature of soil such as salinity, pH, texture also determines the type of microflora it can support. 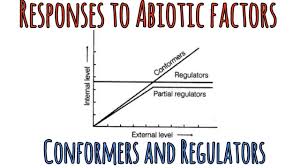 The abiotic condition in a habitat can vary from one time to another. When the condition is not favorable for the morganism, it has the following possibilities:

 The organism maintain a constant body temperature (thermoregulation), osmotic concentration (osmoregulation) condition even if the external environment changes (homeostasis).
 Sweating, in summers is a method of cooling due to the evaporation of sweat.
 Shivering, in winter is method of producing heat
 Example :- Birds, mammals, few lower vertebrate and invertebrate species.
 Mammals show a wider range of distribution (heat of the Sahara desert to the chill of The Antarctica)
 Plants do not have the capability to regulate.
ii) Conform
 The organism changes their body temperature/ osmotic concentration as the ambient condition changes.
 99% of the animals and all plants.
 Reason why small mammals and birds don’t regulate :-
Thermoregulation (such as sweating) is an energy expensive process and heat loss is a function of surface area. Small birds and mammals have a large surface area to volume ration and thus tend to loose heat rapidly. They will have to spend much energy to produce heat. So they just conform according to external environment than regulate.
 Some species regulate to a certain extend and then conform

 The organism move from an unfavorable condition to a favorable one temporarily
 Siberian crane travel long distance to India (Keolado National Park, Bharatpur) to escape the harsh winter condition in Siberia.
 They return back when the condition turns hospitable.

 Some organism form spores, seeds etc. which is in a suspended form. These bodies have reduced water content and metabolism.
 These bodies are means to escape unfavorable condition and they germinate when condition improves.
 This is also called as dormant stage.
 Bacteria, Fungi and lower plants form spores
 Plants form seeds
 In animals a special case of suspension in time occurs. Hibernation; winter sleep in bears and Aestivation; summer sleep in some fishes and snails. 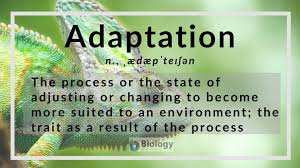 The special characteristics of plants and animals that enable them to be successful under prevailing set of environmental conditions, are called adaptations. Strategies of Adaptations in Plants

Sun loving, adapted to high intensity of light, and have higher temperature optima for photosynthesis, as well as have high rates of respiration

Shade loving, shade adapted plants generally have low photosynthetic, respiratory, and metabolic activities. Plants such as ferns and several herbaceous plants growing on the ground under the dense canopy of trees, are shade tolerant plants.

Plants of hot deserts, adapted to survive in dry conditions and high temperature and short life span. In desert areas of Rajasthan, many annual plants germinate from seeds, complete their life cycle quickly
during the rainy season. They have deep tap roots, which can reach even up to water table, in arid climates, and therefore, are capable of absorbing water from deep soil. Examples, Prosopis (mesquite), palms and some species of Acacia.

Plants which remain permanently immersed in water. Aerenchyma (large air spaces) in the leaves and petioles helps to transport oxygen produced during photosynthesis and permits its free diffusion to other parts. These tissues also impart buoyancy to the plants.
Examples, inflated petioles in Eichhornia (water hyacinth), Poorly developed roots are poorly developed or absent in free floating hydrophytes like Wolffia, Salvinia, Ceratophyllum and Hydrilla. Nymphaea, an emergent and rooted hydrophyte, which is seen growing in a pond  Nymphaea and other hydrophytes growing in a pond (Courtesy : NavtejSingh)

found in marshy conditions of tropical deltas and along ocean edges. They excrete salts through the salt glands on the leaves and roots. They may also have high levels of organic solutes, such as proline, and sorbitol. Dunaliella species (green and halophytic algae found in hyper saline lakes) accumulate glycerol in the cells, which helps in osmoregulation.
Avicennia and Rhizophora (red mangrove) have, pneumatophores, prop and stilt roots, and vivipary (seeds germinate while on the tree), etc. Pneumatophores (the respiratory roots) take up oxygen from the atmosphere and transport it to the main roots. Prop and stilt roots, in many species of mangroves, give support to the plants in wet substratum. Vivipary permits plants to escape the effect of salinity on seed germination. 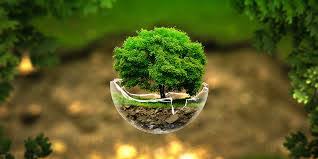